Publishing, Pundits, and the India of all things

This was my first time at Delhi’s World Book Fair, until I was quickly bombarded with memories in hall number 12, from when I was six or seven years old, of being pushed into the Scholastic book stall, coaxed into sampling the many educational toys and multimedia that would test my applied mental maths, science and grammar skills, complementing my good Indian education, preparing my kid-brain for standardised (and computerised) test-taking in the (far) future.

Today, a different excitement preceded me. When I heard about colleges giving free iPads to Indian students, my heart skipped ten beats – was this my India? People throbbed between stalls and aisles where screen space and page space became interchangeable; BPOs had also become book happy. Good commerce was the high point for many Indian publishers today, the unicorn of world publishing, having forever thrived on their volume and velocity of books in numerous languages from over 5000 years of documented and undocumented wealth from skinny pamphlets to doorstopper tomes. Books as cheap as Rs. 15 were displayed on exhibitor shelves and promoted alongside live authors holding out glass ashtrays (and fishbowls) for donations. Self-publishing brokers enticed you to ‘become a (published) poet in 25 days,’ and booklove was competing for shelf space with bookbiz. With a sizeable cross-section of people of different ages and sections of society, the footfalls were the roughest survey of what indicated a clearly buoyant industry. Local language publishers (and we have about 22 formal and over 400 spoken languages in India) were all obtaining niche markets in retailers and libraries abroad, setting up new imprints, breaking new inroads. Digital was just another dimension of Indian publishing and beckoned no print apocalypse, even as publishers the world over racked all their brains, whipped up new technologies to struggle to co-exist in a tablet eat tabloid world.

The running theme ‘Indigenous voices’ offered a sound platform for the showcase of local and legacy  art including Bihar’s historic Madhubani paintings depicting gods and goddesses sketched by artists who mixed their colours from plants, bark, and cow dung. The artists said their art could not be muted by a stink, even if “sab devi-devta gobar hain” (all the gods are dung). Our economic choices are our social choices too.

But the special debut this year was the ‘author’s corner’: cool hotspots in every hall were dedicated to author interviews and interaction. The organizer proudly told me it came from NBT’s generosity and commitment to authors so that they do not have to be crammed in publishers’ quarters, stalling instead of aiding commerce. The idea was great, equally inspired by other world book fairs and intended to accommodate healthy, telegenic audiences.

My first event at the author’s corner would be for the critically acclaimed book Our Moon Has Blood Clots and its author Rahul Pandita. No sooner had I arrived at the venue than I was greeted with the sight of a gentleman in white robes and flowy hair, bloodshot vermilion with rice grains shooting out of his forehead, as he reclined into the studio sofa. “Ladies and gentleman forks” he began, “I am Hindu Pandit, you can ask me anything you want to know about Hinduism, Hindu ethics and Hindu morality.” A trickle of followers wormed their way into his audience hold, and began asking him questions about how to be a good Hindu.

His advice went on unabated for ten minutes until I caught the attention of an NBT guest in-charge who hurried over when I signalled to her that this was not the author! Her jaw dropped; she had asked the wrong man if he was Rahul Pandita and he had replied, yes, seizing the stage too promptly. For proof, when I reproduced the author’s photo from the insides of his first book, the girl paled, but shot quick orders for cameras to stop rolling. The speaking man onstage caught wind, and with the force of an ablution dropped the curtain, “Thank you forks.” A trickle of audience members almost as easily dispersed with him, leaving one with doubts about their ‘genuineness’ too… were they his followers pretending to be an ‘audience’!

In between speedy intercoms the boss organiser who had visited the publisher stalls meanwhile, returned to us with no news, declaring the event cancelled. “Bah! These English language authors are all like that…”, he cackled. “Big foreign publishers are also like that…” he continued, “Gulzar ji, Akhtar sahib, and even I would never do such a thing!”

On that fated Saturday, when other anticipated authors made their absence felt too, Mr. Akash Bannerjee, author of India Shining and Sinking and former TV TODAY broadcast journalist took on the vacant slots, capturing the minds of an army of media students and budding journalists as he waxed on about the day’s news from Afzal Guru’s hanging that morning, to the highs and lows of Indian journalism today, provoking intense debate about idealism and commercial sense in newsmaking. Book? Author? Who?

Even the absence of few heavyweight authors on a Saturday did not quite dent the spirits of the masses who had come to this Kumbh mela in books with hopes in hell to sever from their loved ones and siblings, even as a handful of men roamed the grounds claiming to be speakers, jockeying for minutes of fame on the NBT film archives. The National Book Trust staff utilized twenty minutes of cancelled event time that day, capturing my own video bytes for their film documentary, sending me home in a woolly sheep's clothing.

Posted by Unknown at 9:45 AM No comments:

Venue: Pragati Maidan
Duration: 04 Feb to 10 Feb 2013
The overall excitement was palpable every-where and only to be experienced. 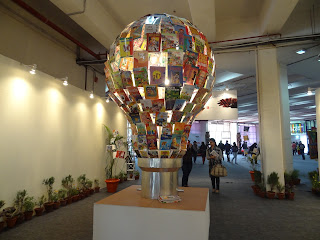 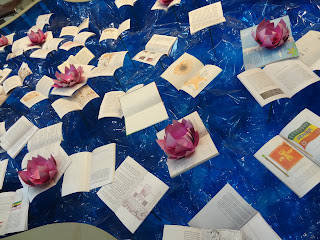 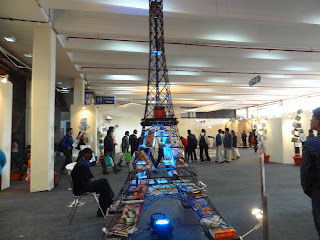 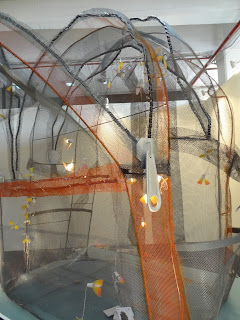 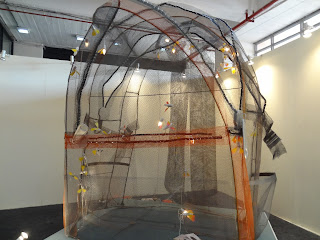 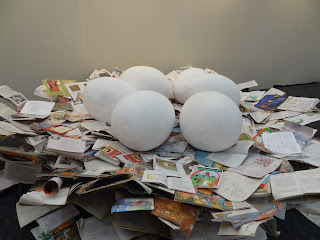 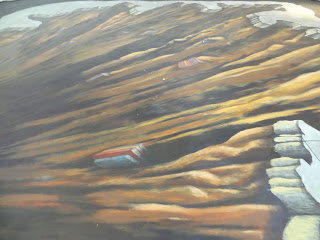 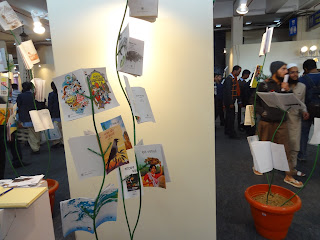 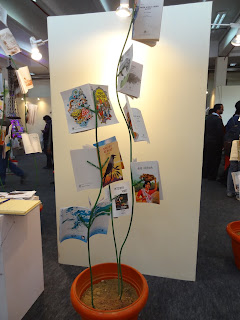 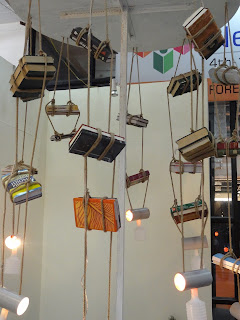 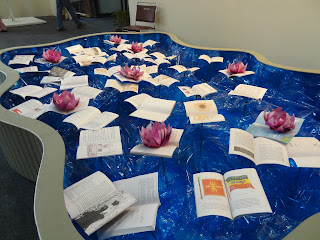 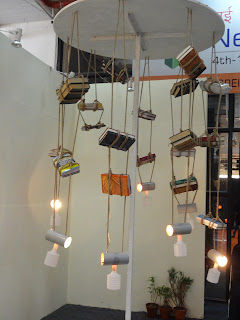 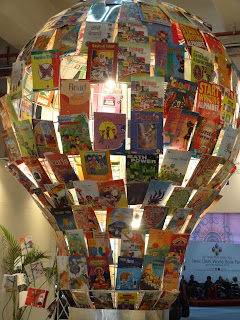 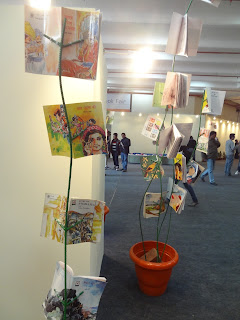 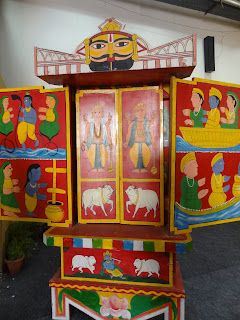 At the book launch of Indianomix

Today's book launch of Indianomix (Random House) was held in what Mr. Gurcharan Das described as 'the most beautiful house in Delhi,' at 4, Aurangazeb Road. The authors Vivek Dehejia and Rupa Subramanya are both Indian Canadians and columnists who discussed the making of modern India, after  quickly dropping the bombshell that economists were neither apathetic nor always rational. That, behavioral economics was very much a part of what influenced their book. That although, they would not predict who the next PM would be, nor politically scrutinize why the war of 1962 was lost, their analyses would shed economic sense on modern India with all its baggage.

The Canadian High Commissioner Mr. Stewart Beck introduced the floor, expressing that his own experience of India began with the fortunate words of good Indian writers like Gurcharan Das.  The lively Mr. Das began with his conclusion that the top purpose of any book was to entertain, and meeting that criteria, Indianomix was much loved by him, and full of interesting everyday vignettes, character sketches and scenarios that got turned a blind eye.  The authors felt their book was a global book, but written for people with some interest in India and Indians. Mr. Das on the other hand, admitted that his own books were written primarily for an Indian audience, and that other readerships were just a bonus. As a student of Mr. Henry Kissinger in his undergraduate years, Mr. Das often got asked as to why Nehru always incorporated morality in politics! Dreamers, repeated Das, should never be put in power for the same reason. Akin to Freakanomics style, the day's discussions skimmed through probability in every instance of modern Indian life, not alien to regular consumers of the news, and yes, although they all sat like a TV panel, they spoke "one at a time," insisted Mr. Das. A session that was wonderfully moderated, pulling together a lot of highly networked people under the same roof on a cool Delhi evening.

'Lit for Life' kicks off in Delhi first!

The Hindu's annual Lit for Life kicked off with its Delhi segment at Teen Murti Bhawan today. Dr. Nirmala Lakshman of The Hindu welcomed everyone with a series of clips from past years' lit festivals. Literary consultancy Siyahi's Mita Kapur and Ms. Rachna Singh Davidar were gratefully acknowledged and in full attendance too. While the major part of the festival is slated to run in Chennai, with interactive workshops and events planned for next week, the reason that the Delhi inaugural event was significant according to Dr. Lakshman was that The Hindu's readership has peaked in the past quarter in the Capital, breaking old bastions, eliciting a larger readership of unprecedented numbers breaking out of its traditionally Deccan stronghold. Festivals like Lit for Life, she said, enables them as a newspaper to forge a direct link with readers on topical issues through books that matter.

A charged evening greeted journalist Shankar Aiyar's discussion of Accidental India A History of the Nation’s Passage through Crisis and Change,. Following Mr. Aiyer's 5 minute powerpoint presentation detailing the thesis of his book, editor of The Hindu and the panel moderator Mr. Siddharth Vardarajan fielded questions at the issues pinpointed in Mr. Aiyer's book for all panelists to review and consider. Long rapid fire exchanges between Brinda Karat (CPIM), Jayanthi Natarajan (Congress), internationally famed Indian economist and writer Bibek Debroy, and Shankar Aiyer himself challenged the author's view that (only) 'crisis precipitates change', and that a hierarchy of change and turning points in India's history (that acts of crises had sparked the Green Revolution, the White Revolution, the IT boom, the Right to Information Act etc.) thereby leading to its accidental transformation! This led to questions about the polity of India, and whether we were better off without rulers and certain ministries that were slaking in big bribes feeding off corporate power and wealth. Bibek Debroy elucidated that the question really worth asking was, whether the roles of the executive, judiciary and legislature were in cohorts with each other for the same ultimate goal of social and economic equity and progress as first visualized in the Constitution. A trove of facts and trivia about India's mis-place in the world, malnutrition figures, an increasingly young and bursting demographic, kept returning to the table, as the panelists tried to pin down the ills of a society, where corruption was embedded in the moral fabric of its democracy.

Longtime friend and supporter of Mr. Aiyer, Bibek Debroy, after objecting to the use of the words crisis and accident, insisted that the more pressing discussion ought to be about the role of the state in reducing the inequities that presently exist. Moreover, while Mr. Aiyer's book's introduction does make 'a passing reference' to how the state could address malnutrition, deteriorating health services or other social sectors in decline, plucky provocative questions flew about the floor as panelists singled out ministries (civil aviation, rural development) and debated their centralized power. Ms. Karat claimed that politicians were not the only ones to blame, and that while corrupt politicians should anyway be shamed, arrested, jailed, and executed, it is the big corporates who are 'givers of the bribes' that must not be let scot-free. The entry of huge pharmaceutical giants and no proper regulation of MNCs in India was responsible was creating a massive health debt, and infringing on proper, engaged, accessible services at the local level. Impassioned arguments stoked the evening, always, a promising start to any long literary event.

The session was followed by high tea, and another author journey with photojournalist Steve McCurry, followed by author signings with the partner bookstore Landmark, and a final roll call of the shortlist for The Hindu literary prize 2012, final winner for which will be announced in Chennai next week, in a  more elaborate turn of events.