Technology is electricity, and writers are not entrepreneurs

Technology always existed, in the way, opinions always did. Talking of digital conventions replacing the old, is like saying there is more electricity in the house. Technology cannot work in isolation of Media, and good (profitable) publishing is becoming increasingly data driven, than we care to know.

As ebooks compete for recognition and visibility, worldwide, they have gained traction with users in huge numbers. I am very ready to give up the physical book completely (I remember trudging long distances as a schoolgirl in sweltering summers burdened by at least five kilograms of weight of my bookbag everyday) , as long as the culture and values of books continue. The convenience and ease of the internet, and its hardly social nature, is what tempts me as a reader. The omniscience of the book, in a digital world is here to stay. No more recycling paper, but washing eyeballs. Hail oculist.

Writers are not risk takers, but helpless creatures born out of desperation. An urgency, that has clearly nothing to do with risk but survival. Writers write, regularly, with nothing at stake but their own poor selves. They could hardly be called entrepreneurial for breathing. Significant people have tried putting this across to me at varying junctures with varying degrees of politeness/kindness and sympathy.

The most exciting news this Valentines Day was of Bloomsbury's entry into India, following Simon & Schuster, Lonely Planet, agent Aitken Alexander and the Hay festival. Bloomsbury India will first be looking at taking on marketing and sales people and editors will follow in due course. The new MD for Bloomsbury will be Rajiv Bedi, who is also ex MD of Pan Macmillan India. In such a climate, it would indeed be worth exploring what UK publishers are doing to maximize their profits by entering global markets. It could be the topic for my Masters dissertation, at least.

Posted by Unknown at 7:54 PM No comments:

Wherein veteran bookseller and trustee of the Wigtown Book Festival, Shaun Bythell offers a first hand account of the slowing business of used books, customer behaviour, and the lofty forces of online retail.

I bought my shop ten years ago.  For the first eight years, we saw a steady rise in takings though the shop, then the credit crunch hit, and we noticed a significant drop.  Analysing the figures, it became clear that over those first eight years, although the average amount a customer would spend had increased, the number of paying customers per year had steadily decreased, so when we got to September 2008 and the banks started to collapse, people naturally started to spend less.  The combination of the decline in paying customers and people spending less has meant that we've been hit pretty hard. 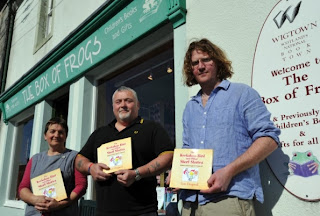 The steady drop in customer numbers is interesting in that I don't think that we've seen a decline in the number of people coming through the shop.  I think, if anything, that has possibly increased.  Over the ten years that I've owned the shop, I think increasingly people who were uncomfortable buying things online (largely due to paranoia about credit card security) have become more comfortable with online buying.  Certainly Amazon's turnover has soared in the past ten years, and there is probably a direct relationship between the increase in online sales and the decline in high-street sales. And this isn't just about second-hand books, it's about almost everything.

People come into my shop with (blank) notebooks, and they scribble down titles, then go buy them on Amazon

The high-street is going through a pretty painful transition, and you can't blame people for buying things online when they can be so much cheaper - of course they'll be cheaper if you can cut out the middle-man, which is what the internet does.  The problem is that a significant number of people are employed in the high-street, and they are all losing out to the boom in online buying.  The customer ultimately loses out too, in one regard.  I've noticed in the past couple of years that a lot of people come into the shop with notebooks.  In the past these would contain lists of book titles which they were looking for.  Now they're blank, and they scribble down titles which they find in my shop, then go and buy them on Amazon.  If this trend increases, my shop will no longer be here for them to browse in.

The only way to really make online selling really pay is to become a mega-lister.

When I got into this business ten years ago, selling on the net was in its relative infancy, and if you listed a book on ABE you could ask for way more than you could in the shop because there were relatively few people doing it, and buyers who were desperate to get hold of a particular title would pay a high premium for it.  Now, the online market is flooded.  Many thousands of business are now selling online, primarily through Amazon, and price-matching software and smart databases mean that hundreds of thousands of titles which would have been in the £5 - £25 bracket in most shops, can now be picked up for a penny on Amazon.


So, what do you do?  You join them, and put your stock online.  We've always listed our top-end stock on ABE, and it has more or less covered its costs and left us with a small margin of profit - I have someone employed full-time listing books.  Now I've taken on two more people to list the shop stock of 100,000 titles.  We're making progress, but slowly.  Listing online is far more costly than people imagine.  The big sites, Amazon, eBay, ABE and Alibris, take roughly 20% of your turnover, eBay charges an Anchor Shop fee of £350 a month, our database management company also charges us a monthly fee based on our sales, wages cost me about £500 a week, at the moment our postage is about £1,000 a month, add to that your stock purchase cost and other miscellaneous costs, and there's not a lot left at the end.


The only way to really make online selling really pay is to become a mega-lister.  There are about ten of them in the UK, and they have literally millions of books.  I've been to one of these operations and it is not the way I want to go.  It was like a Dickensian workhouse.  They buy books from libraries, charities, and other institutions by weight, so 40p per kilo or something like that.  They're not interested in individual books, but vast quantities.  It's all about volume.


The one which I visited is in a massive warehouse.  The books come in on pallets, and a couple of people put them on conveyor belts from where they go to about ten people standing at their workstations.  They each have a PDA with a scanner on them.  The PDAs are wirelessly linked to Amazon, and preset to reject anything that doesn't fall within their preset parameters (eg, must be worth over £2, must be above 500,000 in the Amazon rankings etc).  The rejected books then go onto a conveyor belt and into a skip.  The skip is collected regularly, and they get paid by the ton for the rejected books which then go for recycling.  The non-rejected books are automatically listed on Amazon, numbered,  and put into labelled boxes which go onto numbered shelves where they stay until someone orders them.  There is a team of people whose job is to pick the orders, and another team whose job is to put them in jiffy-bags and stick labels on.  Another team deals with email inquiries.  When it's time for a break a claxon sounds, and when break is over it sounds again.  Most of the staff doing this are graduates on minimum wage, they don't even need to read the book's title, or write anything down.  The place which I visited employs about 60 people.  This is what small dealers have to compete with.  It's like Tesco vs. a corner shop.

Malicious false reviews can put you out of business

Does selling online through Amazon etc. encourage people to come to the shop?  No.  People look at your feedback and if it's OK they'll buy from you, but there is no brand loyalty.  The brand loyalty is to Amazon, and the customer is king.  Sellers live in fear of negative feedback, which can be on the whim of a customer - a complaint about a defect which was clearly listed but which they didn't bother to read in the description, or about delivery time which is largely down to the post office, not the seller, anything they feel like complaining about, they can, and there's nothing you can do about it.  Look at Trip Advisor - malicious false reviews have put hotels out of business.


When I bought the shop ten years ago, it was partly because I was drifting through life, and saw it as a chance to get stuck into something which seemed like an idyllic lifestyle.  It was for a while, and I'm sure it will be again, but at the moment it's a question of adapting to survive, as it is for most of the high street.  I think a lot of innovation has happened as a consequence of online selling, the most obvious being Currys and Comet whose staff were notoriously ill-informed about their products.  Now, they are superb.  They all know their range really well, and are incredibly helpful.  Sites like Amazon have responded by allowing customer feedback on products, so I suppose the high street will have to innovate further.  Ultimately, to survive, the high street will have to offer more of an experience than shopping online, enough that people will want to return to shops.

Publishers think the hardback has a future, but it will have to raise its game, become an object d'art beside all things digital

My customers in the shop are all adamant that they love books, love book shops, and that they'll never buy a Kindle, but that is exactly what people were saying ten years ago about records and CDs vs. the iPod, and look at how that has turned out!  I bet less than 10% of people under 20 years old have ever bought a record or CD.  There's a lot of discussion in the book/publishing world about whether the future of books is digital, and of course nobody really knows.  Publishers generally seem to feel that the hardback has a future, but like Currys and Comet, it will have to raise its game and become more of an objet d'art, possibly with things which the digital version can't offer.  The holiday paperback seems to have a less bright future, with many publishers tending to think it is going straight to ebook.  Amazon's venture into book publishing is also throwing up a lot of interesting questions; let's hope that there's still a place for the small independent bookseller to make a living in ten or twenty years time.

Anyway, if all that sounds a bit whingy and pessimistic it doesn't really reflect my attitude to book selling, more my worst fears.  I still utterly adore my life and will do what it takes to make sure it stays the way I like it.

Thank you very much Shaun Bythell. He can be visited at the annual Wigtown Book Festival in September and at other times in his shop.