Travelling for a bookshop, reading for a destination 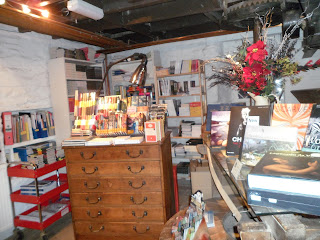 I travel towards books, and if I could, I would travel for a living, towards books. This December, to get away from all the distraction offered by myriad festivities, I set about scouting book couture, in the heart of the  Scottish highlands. 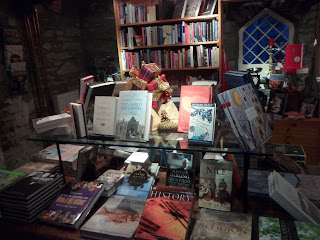 I visited Aberfeldy in Highland Perthshire last week, to stop at UK's independent bookshop of the year The Watermill. Home to three stories of books including a contemporary art studio at the top and cafe in the basement with a fireplace, the Watermill sees a daily quick turnover of travellers, readers and backpackers. Every floor churned my travelling juices. The by equal parts messily stacked and equal parts artsy decor with books overflowing from tables was attractive, when not a grim reminder of the price of estate. The ambiance was that of a gift shop's, with everyone, Christmas shopping here. There were no discounts, but more variety in books than you could imagine in all of the Scottish Highlands here. Move over Scotch and chocolate, the average European wants a warm happy read at the end of a festive supper.

Books are the gateway to a city's culture, economy, and industry. They drive a city. Bookstores in the UK I have visited so far have been mostly chains, high street retailers and the odd independent bookstore. The Watermill by far is the most picturesque and self contained store, with a gleefully sustainable turnaround of footfalls including roadside travellers, youngsters and seniors alike (although I did not notice any children and an entirely empty children's book room), book club members, working men and artistes. A large section of the bookshop's lists are devoted to travel books and unique indigenous travel books, guides and anthologies that are exciting and heartening to who wear their map on the sleeve. Titles that caught my eye separate from the Lonely Planet, Rough Guides or other commercially popular series, were travel accounts like: At the Loch of Green Corrie (Quercus), How to Climb Mont Blanc in a Skirt (One World), Map Addict (Collins) among several others. Uncluttered by festive decor, yet retaining the spirit of all season charm, this inspiring venue has been awarded 4 star badge by the Scottish Tourism Board for the Year 2011.   Run by a couple from London Kevin and Jayne Mayanje, who after sending off their children to university were hillwalking in Aberfeldy Perthshire when they stumbled upon the Grade 1 listed oatmeal mill spread over 4500 square feet, built in 1825 and were attracted by the business proposition. While the stone exteriors of the building were intact, over £330,000 worth restorations were made inside the building to make it what it is today-- a thriving functional business, where lights are run on the live functioning watermill. The couple also runs the Homer homes and Gardens,  'vintage decor' shop in Edinburgh. Some of their vintage collection items are on display and for sale in The Watermill too. For instance the Tokyo based, Mahayuna series of lights including the one (pictured below) called the Goben now priced at about £369. A complete must-visit for traveling art fans, serious tourists and bibliophiles.

Getting there
The train from Stirling to Pitlochry is about one hour and follows the route:
Stirling-> Bridge of Allan -> Dunblane -> Gleneagles -> Perth - > Dunkeld -> Pitlochry


Walk to the bus stand on the main street in Pitlochry and wait to board 23C to Aberfeldy which includes a transfer of bus at Ballinluig . The second bus (also 23C but labelled 'Aberfeldy') takes you straight to Aberfeldy.

Detours after Ballinluig: If, however, you want more value for your entire bus return ticket, you can get off at Grandtully from Ballinluig and arrive at Loch Tay (you'll see roadsign 'GRANDTULLY') so stay tuned to the road because the driver does not know you are unfamiliar with the route and won't stop unless you warn him in time). At Grandtully, visit the Highland Chocolatier opposite the bus stop :) and relish in the delicacies of homemade factory chocolate.

The bus from here on is infrequent, and by the hour (every 45 minutes or so), so time your hour to savor meaningful moments in the Legends Coffeehouse, or watching films on the making of cocoa and the world map of chocolate. Once done, hop back onto the bus with the same ticket and look out for the Dewar (pronounced dew-aar) Distillery. Request the driver to drop you here, and  run (the door for the tour closes  at 15:00 in the winter). Students get a whiskey tour for as cheap as 7 pounds, here, and there are more blending experiences that aren't too expensive and quite memorable. Now that you've settled in with the warm fuzziness of  malts, straighten up and bolt along the road, keep going straight (there is only one main road!) until you hit Chapel road, and continue on straight through the City Center of Aberfeldy, cross the square, and suddenly on a meandering right lane downhill you'll  spot a postcard pretty Stone dwelling, with the sign The Watermill. You have reached your destination!


Caveat: Buses are filled with locals and schoolchildren. Tourists rely less on public transport and arrive in couples or groups at the most and that too in private vehicles or group hires; but if you're solo and can sync your times with the pressure of public transport timing, you might just succeed with flying colours! People are calm and helpful if you get talking nicely, and won't bother you because they know you know your path.

Why Stirling: I live and study in Stirling, Scotland's ancient capital.  Trapped in the love triangle with Edinburgh to the east and Glasgow to the west, all my travel is based out of this town that homes about 40000.

An Indian city equivalent: This might sound cliched but I do sometimes see Nainital in Scotland, a country as colonially influenced, as pristine, and as fiercely independent in couture and consciousness. Uttarakhand, UK license plates are all that are missing.

Also, even in this age of the (free) internet: Culture can never be free. Aye. So you better be sure what you want, exactly. It might very well be worth the expense.
Posted by Unknown at 2:55 PM