A Lilting Murder Mystery in a Girls' Boarding School

“All my life green chutney sandwiches have stood for hope,” proclaims Charulata Apte, the central heroine of Nayana Currimbhoy’s Miss Timmins’ School for Girls, the mystery thriller that makes a prominent debut in USA and is on bestseller lists in India this month.
CUT TO the “Kashmir of Maharashtra” in monsoon and mist soaked Panchgani. Then, if Kashmir is the Switzerland of India, it isn’t difficult to imagine being in the Alps while in Panchagini, rationalizes the 20 year old schoolteacher Charu in the novel.
When Charu Apte (who gets nicknamed APT by her students), leaves her family abode from a Brahmin middle class household in conservative Indore, to move to Panchgani to teach Shakespeare, the cultural shock is apparent. More so, because she is teaching at a boarding school that is still an outpost of the British empire that observes quaint traditions and Anglo Saxon rules, even though they are in the Rock and Roll seventies and thirty years after India’s independence!
For those having grown up on a diet of Mallory Towers, Swami & Friends and even Sweet Valley, the growing pains, sexual awakening, friendship, mystery, Bald headed suspects, dark rainy evenings and TUCK will be familiar territory, except these references are mere pivot points that lead off into entirely Gothic and unexplored proportions. This is a social drama and murder mystery!
Miss Timmins' School…lingers like the flavorsome buttery Shrewsbury biscuits the running metaphor throughout the story. Chapter titles lose relevance, as the story seamlessly and soundlessly moves into climax. Mighty ruminations and commentary on sex, taboo, elitism, and the convent bred chauvinism versus Hindu Indian patriarchy within a larger than life storyline offer nuanced characters and unique sketches of the boarding school milieu. Midnight Feast Material!!
Nayana Currimbhoy, the New York based author has indeed churned out one wholesome yarn of a thriller that has love, mystery, gloom and humor in Miss Timmins’ School for Girls.
In Conversation with the Maker of Miss Timmins’ School for Girls
Nayana gets talking with us across the seven seas as she gears up for her Delhi book launch on 11th August. She tells us about her 500-page page-turner that is already riding high on the Indian bestsellers list. 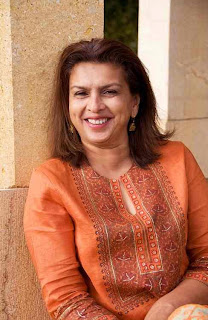